Performance of the Imbolc ritual by Samekhmem at BOYD 5, Bull’s Head, Moseley. 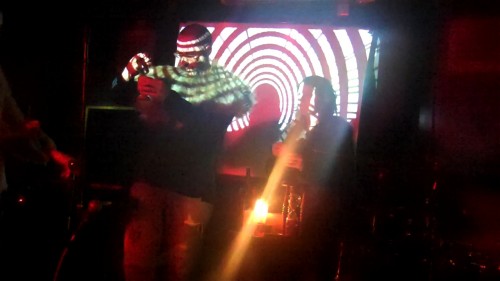 Wearing the ceremonial furs, Samekhmem marked themselves with the sacred sun using oat milk and sage ash, lit the seven candles of purification and set the sand timer next to the Ark of Silence. Channeling the eternal drone at this important time, mid way between the solstice and the vernal equinox, calling upon all of the power of the sun to bring forth the potent energy of the spring brings with it great peril. The resonating power of Imbolc provided a hot, rising, drone power to the ceremony that circled up beyond the control of all who were gathered together. The force of the drone caused great consternation but was a necessary adjunct to the approach of Timewave Zero. Samekhmem continue to transform the dark emanations from Timewave Zero into sonic affirmation of The Eternal Drone.

This coming Thursday, Samekhmem channel The Eternal Drone for you to Receive at BOYD 5 (A Patchwork Of Eclectic Sounds)