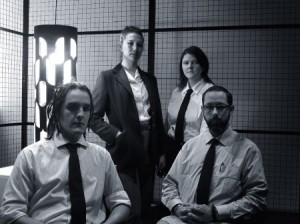 Xe54 was a performative project that developed and changed over a two week period. Participants in the project helped to explore this parallel universe and inform how the narratives and discoveries unfolded. Participants developed a series of ritualised actions to create a quantum sacred event.

Do you dream? Do you have a vision for the future? Xe54 enables you to discover your true path as an explorer of The Other Place…

This is a time of drawing together, this is a time of focus. Many have been called by the lure of The Other Place, and although there are differing interpretations, all agree that something is shifting. The signs say that current events are instrumental in bringing about a transformation, that this world will be overlaid with the other, and that we will be able to move freely into a place of new potential.

Operatives have been experimenting with Remote Viewing and Lucid Dream Training, as ways of creating portals to The Other Place – a space of dreams and ideas, a space of the future, a space of potential.

We have previously been exploring this zone by establishing temporary groups with participants, re-interpreting and re-imagining sites and experiencing our environment with ‘new eyes’. During Xe54 these groups to met together in The Other Place.

Participants could take part in taster sessions, join for a few hours or multiple days depending on availability. The first week of the project (4-7 January) trained participants to be able to encounter The Other Place, make use of new skills with the help of more experienced guides, and play around with their perceptions of Walsall.

Dedicated participants were be ‘inducted’ by a.a.s and grouped into various teams on Saturday 8 January and Sunday 9 January. Each induction session lasted approximately 40 minutes and involved a series of encounters that guided you to The Other Place.

In the second week of the project, participants worked together, finding coincidences and repetitions in everyday occurrences, interpreting signs and splicing them together, to build a collective ‘making strange’ of Walsall.

On Saturday 15 January, participants developed a series of ritualised actions to create a quantum sacred event. Reality is fractured and during a ceremony on Sunday 16 January the dream universe that is Walsall was restored.